Planning to Bring Your Own Firewood to Bear Ridge Campground? 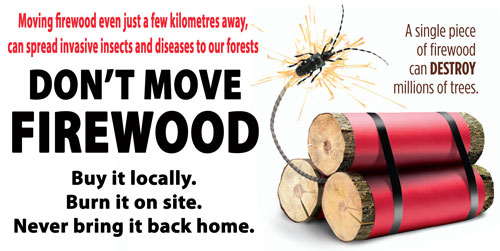 Did you know that a single piece of firewood
can destroy millions of trees?


It might seem difficult to imagine, but something as simple as bringing your own firewood when you travel to or from your favourite campsite could threaten and destroy thousands, even millions, of trees. Transportation of firewood is a common way for invasive species to spread as they remain hidden under the bark where you can’t see them. Campers who bring firewood from home may accidentally spread pests that threaten Ontario’s parks and the health of our forests.

Throwing a few pieces of firewood into the trunk of the car before a camping trip might seem like a good way to plan ahead, but those logs could destroy a forest. The Asian long-horned beetle and Emerald ash borer are of particular concern. They are both recent arrivals to Canada and have no natural controls here. To prevent the spread of these pests, the Canadian Food Inspection Agency has issued Federal Ministerial Orders that prohibit the movement of specific materials, including firewood and any material made from ash trees, from specific areas of Ontario, Quebec and the United States.

These pests kill trees in our forests, cities, streets and parks. This affects air and water quality. It deprives animals of habitat. It damages private property and reduces land value. It can also have devastating effects on Canada's forestry industry and on our ability to trade with other countries that want to keep these pests out.

The Emerald Ash Borer, for example, has killed millions of ash trees in Canada since it first arrived from Asia. On its own, it doesn't move very far. Hiding in firewood, though, it can travel vast distances when that wood is moved by people. Then it kills more trees in new areas to which it has been moved.

The Asian Long-horned Beetle is a destructive pest which attacks hardwood trees, including maple, elm, poplars, birch, and willow. The Emerald Ash Borer (EAB) is killing ash trees in Ontario, and control measures are in place to prevent its spread. Native to Asia, these beetles have no natural predators in Canada. If allowed to spread, they have the potential to kill millions of trees across Canada in our cities, parks and forests.

Upon departure from the campground please leave behind any left over firewood that was either purchased in the area or that traveled with you to the park. This will stop the spread of any unwanted pests.